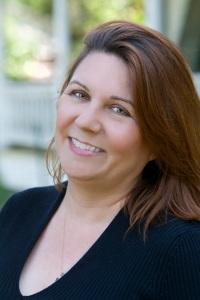 In an alternate universe, JC Cassels is a space pirate. In this reality, she only writes about them. Author of THE BLACK WING CHRONICLES series, JC Cassels was born and raised in sunny Tampa, Florida and blames the local pirate lore, as well as her father’s frequent business trips to the Kennedy Space Center for her childhood desires to be both a swashbuckler and an astronaut.

Equally unable to make up her mind on a professional field, JC worked simultaneously as a freelance writer for newspapers and magazines, and as a freelance audio engineer (among other things) for network television and live concerts. Both careers have taken her halfway across the world. She’s trying to figure out how to get to the other half. She still misses the limousines and the luxury hotel suites, but is happy to finally know where she is when she wakes up in the morning.

When not writing in her haunted hospital, JC lives with her husband, three geeks-in-training, dogs, cats, and chickens in a drafty old house somewhere in quirky rural Georgia.