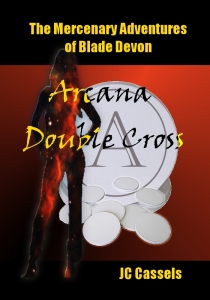 To keep with the theme I’m following on my blog, “Celebrating Big Damn Heroes,” this week’s snippet is another departure from the upcoming release, SOVRAN’S PAWN (April 20). This week’s snippet comes to you from one of the lost novels of THE MERCENARY ADVENTURES OF BLADE DEVON. Set approximately five years after SOVRAN’S PAWN, this snippet from ARCANA DOUBLE CROSS (Fall 2012), Blade’s contract negotiations with a new client were interrupted by a group of heavily armed men opening fire on them. While his associates cover their escape, Blade and the girl slip out the back.

They came out in the dim glow of the street lamp. Something scratched against the pavement to his left. Blade turned, shoving the girl behind him. His every sense screamed, warning him of danger, without conscious thought, he raised his weapon and fired. A humanoid form melted out of the inky shadows and collapsed in the orange pool of light. Beside him, landed his sidearm, still unfired. Blade stared at the apparition for only a second or two, then he turned and pulled Caitlin with him along the alley. Reaching the street, he slowed and pressed deeper into the shadows. His sharp gaze flicked up and down the street, peering into shadows.

While marching into a club in force and opening fire on the mark was typical of syndicate tactics, it also flushed the quarry out of a more defensible position into the open where they would be more exposed and vulnerable. Rather than racing out into the open street, Blade patiently held position in the shadows at the mouth of the alley scanning the buildings and surrounding rooftops for any signs of a sniper waiting to pick them off.

Well, that’s the Saturday Snippet for this week! Please don’t forget to comment by clicking on either the blog title or the little quotation balloon in the upper right hand corner. Tell your friends. Stop back here next week for another!

If you want a little more of SOVRAN’S PAWN, BARRON’S LAST STAND, or to learn more about THE BLACK WING CHRONICLES, just click on the links.