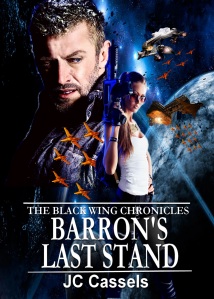 “Commander Bo Barron, Scourge of the Seventh Sector, I hereby arrest you on the charge of treason against the Commonwealth.”

Bo stared hard into his eyes, hooded by a protruding brow. The natural armor that passed for skin made a rippling pattern in his uniform when he moved.

“Treason? Why…that’s old news. I’m wanted for murder, extortion, sedition, smuggling and a bunch of drunken and disorderlies, by now.” She canted her head at him. “Why do you think they call me ‘Scourge of the Seventh Sector’?”

Bo mentally ticked off everything she knew about his species. Akitan. Planetary native. Burrowing ancestors. Warriors. Sensitive between the overlapping plates. No teeth. Sharper than hell claws on upper and lower extremities. Stubborn and tenacious.

She glanced at the rank on his tunic and trousers. Sub-Commander as well. Great. Her arrest could mean his promotion. Not good. Her eyes flicked over the other six soldiers in his squad. One stroked the trigger guard of his NS-10 energy rifle in silent warning.

They had every right to feel confident. They had the Commonwealth’s Most Wanted cornered on a catwalk six levels above the main floor of the detention center. Cornered wasn’t the same as helpless. All she had to do was stall for time.

“I can see I’ve underestimated you, Sub-Commander,” she said. “How did you know I was here? I know for a fact I didn’t trip any alarms.”

“Experimental bio-sensors we’re testing,” he said. “You couldn’t have known about them.”

Fat lot he knew. Edge had warned her about product testing in the Third Sector. Typically, she hadn’t been listening. Oh, well. Not productive to worry about that now. If she got out of this one, she wouldn’t make that mistake again.

“Lay down your weapon, Commander,” said the Akitan. “Come quietly.”

Bo spread her hands in a gesture of surrender and tried a benign smile. “Don’t worry Sub-Commander,” she said. “I know when it’s over.” Bo relaxed her hold on her Capre and slowly knelt down to set it on the platform grill. Mentally counting off the seconds, she strained to listen for her signal.

Right on schedule, the charges she had set at the munitions bunkers began exploding. The building rocked with the force of it. The guards, taken by surprise struggled to maintain their footing on the radically swaying platform.

Bo fired at the grill just in front of her. The Capre blasted a perfect, meter-wide hole in the fuseform. She dropped through it, landing hard on the catwalk below.

Ignoring the jolting pain in her knees, Bo rolled onto her back and fired four quick bursts at the rear catwalk supports. The horrifying screech and groan of metal bending into new and exciting shapes drove her to her feet and over the rail. Bo dropped to the next level of platforms a split second before the catwalk fell, smashing into the spot where she had just been.

Bodies fell past her. Bo ignored the screams. The catwalks shuddered and swayed drunkenly with transferred kinetic energy, straining the limits of their construction and design. The platforms above creaked and moaned in protest. Bo dove over the rail, and fired her wrist rocket at a fuseform truss above her. The rocket-propelled grappling hook spread its talons and sank deeply into the fuseform, holding fast as the shimmersilk line ran out. Her downward plunge shifted into a graceful arc, and Bo dropped gently to the solid flooring with a quick flick of her wrist.

Another succession of explosions rocked the building. Klaxons raged throughout the compound and the lights died. Bo stayed where she was, ignoring the rising ache in her left shoulder. She counted backwards from three. On cue, the emergency lights flared on.

Now to break the kid out and get back to her ship before the picket ships got wind of her little extracurricular activities.

Her sharp eyes flicked over the area, surreal in the dim amber glow, hunting the guard’s cage before it sealed shut.

Spotting it three meters to her right, Bo sprinted for it and slipped inside, just ahead of the sliding door. In the silence that followed the substantial thump of the closing door, Bo scanned the monitors and readouts. Her hand hovered over the vast control panel as she looked for the emergency manual override switch.

“Come on, Barron,” she chided herself, “you’ve done this before. Think.”

Relying more on feel and memory than sight, she found it and keyed the release of all cell doors. Immediately, the vast chamber echoed with hollow thumps and hisses as scores of magnetically sealed doors opened. She hit the release lever on her own door, then left the cage and headed for the temporary holding cells.