Every now and then, I get to meet some fascinating people.  Someone who has been a good friend to me over the past six months is a fellow Jed-head and SF writer Patrick Stutzman. Not only have we played the Geek version of “What are you wearing?” over the Twitter feed, which is far less provocative than it sounds because the clothing involved happened to be a Phantom Menace T-shirt (which we both own identical copies of,) but we’ve also matched wits playing Star Wars Trivial Pursuit. (It was a draw.) I invited him to share some of his wit and wisdom on the old blog today. 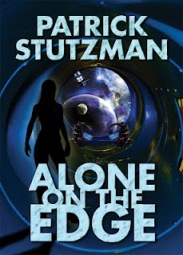 So… (breaking out zee little notebook) Make yourself comfortable on zee couch and tell me about yourself.

(You had to post the hard question first, didn’t you?)

My name is Patrick Stutzman, and I am a writer. (Hi, Patrick!) My secret identity is that of a mild-mannered online support agent for a regional bank’s website. But by night, beware! I become a writing- and gaming-nightmare! Bwahahahaha! … (Oh, sorry). Seriously, I write science fiction, but I started as a freelance game designer. Some of you may recognize my name in association with the Star Wars Roleplaying Game, Saga Edition that was produced by Wizards of the Coast a few years ago. I have done some other assignments on the side as well, but most of my design work was for Star Wars.

Beyond that, I live in the greater Kansas City area with my wife, two kids, and a veritable menagerie of pets. I work with games, technology (computers in particular), and other minor things that may appear from time to time that are shiny and quickly catch my attention. I like long walks on the beach, relaxing by the fire at night, and … (Dang it! This isn’t that online dating survey! Stop that!)

To learn more about me, check out my websites (Is that a typo? No, I meant to make that a single word.) listed below:

Why Science Fiction? What is it about the genre that attracts you?

I have always looked to the future and speculate what lies ahead for me and the rest of humanity/civilization. I guess that’s why I’ve always had an interest in studying prophecies like in Revelation, the quatrains of Nostrodamus, etc. Science fiction, for the large part, allows us to delve into the minds of others’ ideas of what the future may hold, whether it involves space travel, crossing dimensional barriers, encountering strange, new lifeforms, or what have you.

You know, that explains so much to me.
Where did the idea for ALONE ON THE EDGE come from?

From the dark recesses of my mind! Most people emerge as a different person after they go in! Seriously, I finished work on my last book for the Star Wars Roleplaying Game and wanted to keep my writing skills sharp. So, I pulled out my handy-dandy … (Notebook? WRONG! It was my laptop! Ha, ha! 10 points for me!) laptop and started planning on a story to keep me busy. I was originally not planning on publishing it, but I looked up and found that I was already 40,000 words into it without being close to finishing the story. So, I figured I’d see where it took me.

Did you ever feel that you’d painted yourself into corner with your premise for ALONE ON THE EDGE?

Oh, you want a longer answer! My bad!

Not really. I have been writing my books organically. I put down the premise and the setting, and let the characters drive themselves. I know of several other authors that write that way. Honestly, I love it! I find it as entertaining as reading a book for the first time, because I don’t know what’s going to happen next until it happens. I feel like I am a reporter giving a play-by-play record of what is taking place inside my head. As a result, the characters are always looking for ways to resolve their situations. Sometimes, it works for them; sometimes, it doesn’t. You’ll find that to be the case with Anna throughout the book. Some of her ideas and plans go off without a hitch, while others will fall flat or just have a few unexpected complications arise in the process. She just has to deal with it and move on as best she can.

I find it interesting that you chose to have a character like Anna as your protagonist in this series. I’m also fascinated when male writers choose a female protagonist for a story like this. Why Anna? Why not Bob? What was it about Anna’s character that made her the only character to put into this situation?

I suppose the choice of writing about a female protagonist for ALONE ON THE EDGE originally came from my fascination and love for strong, independent women. You might say it’s a fantasy of mine. (It came true! I married one!) Throughout my life, I have had a STRONG attraction to the type of woman that you really don’t want to make angry but at the same time want to take home to satisfy your manly urges. I wrote stories involving women like that even back in junior high and high school. Thinking back, the seed for this came from George Lucas. Thanks for introducing Princess Leia Organa to the world!

It always comes back to Star Wars, doesn’t it?
What comes next for Patrick and Anna?

Anna’s adventures are far from over! Book 2 in the series, titled ALONE IN PARADISE, is currently being edited and should be released soon. In fact, Book 3, titled ALONE IN THE CROWD, is currently being written, so we’re looking at a full-blown trilogy. In addition to the other two books, I also have a short story already available called ALONE WITH HER THOUGHTS, which is best described as a missing chapter from ALONE ON THE EDGE. I have made the short available for free wherever I could.

Thanks for stopping by today, Patrick, and best of luck with Anna’s adventures. I look forward to ALONE IN PARADISE.

Writers are very needy types and like to know that someone, ANYONE is out there. Please don’t leave Patrick ALONE ON THE EDGE. He would love it (you have no idea how much he would love it) if you would take a minute to leave a little encouragement for him in the comment section of the page. Just click on the quote balloon up at the top or on the comment link below.

4 thoughts on “Alone on the Edge with Patrick Stutzman”