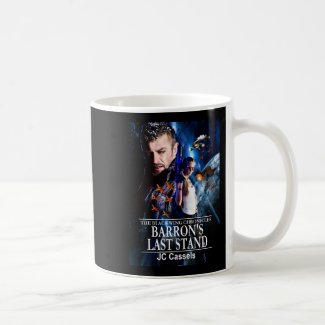 CLICK HERE to pre-order your copy of BARRON’S LAST STAND e-book on Amazon.com

Thank you for joining us today for the final installment of Science Fiction Fantasy Saturday. More than a web ring of tasty snippets of the latest work of indie SF/Fantasy authors, Sci-fi Fan Sat has been a home for me, a sounding board, and the place where I met colleagues who became my best friends. Without the authors and writers featured here over the years, THE BLACK WING CHRONICLES wouldn’t be the same and might never have seen the light of day. A heartfelt thanks to Laurel Kriegler, our illustrious leader and editor extraordinaire for bringing us together in a positive, supportive environment. This Saturday tradition has been the launch pad for my books, and the books of many gifted and talented authors like Cary Caffrey, TK Toppin, Pippa Jay, Patrick Stutzman, Heidi Ruby Miller, TM Hunter, Peter Vialls, SA Check, Gayle Ramage, Misa Buckley, Aurora Springer, and so many more.

It seems only fitting to leave you with a snippet from the same scene, from the same book that brought me to SFFSat to begin with five years ago. BARRON’S LAST STAND was always THE book I was writing. SOVRAN’S PAWN and HERO’S END just happened to be the backstory. Thanks to Laurel’s encouragement and that of the SFFSat crew, I wrote those first and am just now getting back to the book that started it all. So for my last trick, here is a snippet from BARRON’S LAST STAND in which Bo Barron finds that her estranged husband, Blade Devon has stowed away aboard her ship. In five years, the scene has undergone some revisions from it’s first appearance, but here it is as it will appear in the upcoming release.

The smooth, familiar, baritone voice hit her like a plasma storm, taking all her defensive systems offline. Her lungs felt as if the hull had been breached and all the atmo had blasted out into the vacuum of space, leaving her helpless to do more than stare into eyes the same shade as the bluestone of the Gallis Highlands where she’d grown up.

Her heart pounded in time with the cycling engines. She wasn’t some twitter-pated fangirl who would melt under his megawatt, crooked little, bad-boy smile. That ship broke grav five years ago. He did not get to swagger back into her life as if nothing had happened.

She squeezed the trigger.

Blue energy flashed from the muzzle and struck him in the thigh.

He grunted in pain and reached for his wound.

Bo tightened her grip on her blaster and set her jaw. “Keep your hands where I can see them!”

Thank you for sharing these last five years with all of us. God Bless.

Welcome to Science Fiction/Fantasy Saturday! Ten to fifteen sentences are yours for the clicking. Today’s snippet is from BARRON’S LAST STAND. Five years after HERO’S END, Blade finds himself on Bo’s ship, Sundance. He is surprised to find the ship’s sick bay not as well stocked as he remembered.

“Sundance, when was the last time Bo resupplied the infirmary?”

“It has been twenty-seven months, four days and six hours since we put in to a Redmaster Blue base for supplies and maintenance.”

His brow furrowed. “Why so long?”

“Our last stop on Altair, Commander Barron encountered an independent group of contractors from the Assassin’s Guild.”

“Get me the log entry on that,” he said.

After a moment, Bo’s voice came over the grille. “Thought I’d stop by Altair today,” she said, tightly. “Nice welcoming party waiting for me.” She sucked in a deep breath through her teeth. “Cross Altair off the list of safe ports.” She hissed something unintelligible.

Thanks for stopping by! Don’t forget to check out our other participants at http://scififansat.blogspot.com/

The following is a spoiler-free take on THE FORCE AWAKENS:
In a nutshell, in typical JJ Abrams fashion, Disney’s first outing in the STAR WARS ‘verse is heavy on explosions and visual effects but light on character and plot. Characters are flat, and come and go so quickly from the scene that it’s difficult to find anyone to identify with. Poe Dameron made a promising first impression and would have made a wonderful heroic character, but he never got the chance. Where in the original trilogy, the three main characters spent the entire second act working together towards a common goal as a unified team, in THE FORCE AWAKENS, Poe, Rey, and Finn never quite seemed to find their rhythm and spent more time wandering off doing their own thing than building a heroic team.

I felt adrift and disengaged from the film until Han Solo showed up. At last! Here was someone I had an emotional attachment to. Unfortunately, the old, familiar characters we know and love likewise seemed to wander aimlessly, as though even they were unsure what they were doing in the movie. Solo was in an entirely different story that seemed more interesting than the one the young heroes were pursuing. Yes, there was a unifying goal, but by the second act even the bad guy got bored with it and moved on to something else.

It took a while for me to realize why elements of the movie felt so familiar. Abrams made the movie Lucas had originally intended Star Wars to be. I guess because I avoided all blogs, articles and potential spoilers, I didn’t realize that the inspiration for the story line was Lucas’s first draft of Star Wars in which the Luke/Leia character was a warrior “princess” (Rey) and Han Solo/Obi Wan Kenobi was an older mentor guiding her on her quest. Not only that, the look of THE FORCE AWAKENS was drawn from Ralph McQuarrie’s original concept art from before the first actor was cast or the first set built.
Kudos to Disney for going back to the very beginning. I give that nod to early STAR WARS lore an “A” for effort.
Lucasfilm veteran, Lawrence Kasdan worked on the script and co-produced. Lucas/Spielberg protegee Kathleen Kennedy was one of the producers attached to the project.
In the back of my mind, I knew all that.
Was it good? Did I enjoy it? Did it live up to its hype?
Much of it was predictable, but I enjoyed it. Nothing could quite live up to this level of hype. I cheered when old familiar faces popped up. The story was too fragmented and at times seemed to ramble, while subplot and backstory were much more interesting and should have had more screen time. Some old friends were under utilized (R2D2, Luke Skywalker.) So were some new friends for that matter (Poe Dameron, Captain Phasma.) Some plot points defied logic.
It is the kind of movie you want to see more than once to go back and catch the subtle nuances, now that you know what’s going on and who the players are. I’m hoping to find it tighter and better crafted on second viewing.
Star Wars fans will not be disappointed. Action/adventure fans will not be disappointed. Personally, I didn’t feel the ending satisfied. It felt more like the second book/movie in a trilogy than the first. It was almost like Abrams said, “Hey, we’ve got two hours of material now. Time to wrap. Where can we stop for now?”
In short, Abrams was marginally more respectful of the Star Wars franchise than he was the Star Trek franchise. Dialogue was snappy and sassier than the traditionally stilted Star Wars speech patterns. Character development was minimal and it was hard to get emotionally invested in the new characters. There are too many questions unanswered, leaving fans scratching their heads and trying to play catch up before the end of the first act.
As a die-hard Jed-head, I have a love-hate relationship with THE FORCE AWAKENS. As a writer, I am by turns glad I didn’t have to write it and critical of sections that seemed like the writers had no idea where to go from there and fired off special effects hoping the audience wouldn’t notice the man behind the curtain.
I would still like to see a Joss Whedon interpretation of the Star Wars legend, though I feel JJ Abrams actually considered the fans expectations of the newest Star Wars movie. I can’t help but think Whedon could have done a better job and told a more satisfying story, given his penchant for effectively balancing character development, intrigue, and heart-pounding action, a balancing act Abrams has yet to perfect.

THE FORCE AWAKENS is an action-packed romp, but it lacks the elusive spark found in the other films in the franchise.

After all these years, Twitter has flagged the website for Science Fiction Fantasy Saturday as being automated or spam and won’t let us post the link. What is so subversive about a bunch of Science Fiction and Fantasy writers posting snippets of their work? Please share and spread the word. This is censorship!!!

I had an eye-opening experience last night. I found a discussion thread in which someone was trying to find out how to download my books for free. On one hand, I’m delighted that people want to read them. On the other, I feel as though I’ve just had my purse stolen.

You see, every book of mine that someone illegally downloads is a gallon of milk or a loaf of bread that is taken out of my kitchen. When my children stand at the checkout line and ask for a candy bar, it’s the difference between yes and no.

It doesn’t seem like much to the person who stole the book. THEY got a free book. It’s the world to my kids.

Put another way, how would you feel if you worked twelve or more hours a day for six months to a year for no pay and at the end when your check was due to come in, someone decided to help themselves to your wages. That is what piracy is, whether it’s MP3 files, book downloads, or the latest movies. The creative people who make the music, books, and films that others enjoy are entitled to just compensation for their labors.

I am not wealthy. I get no huge advance. My royalties would have to increase mightily to be considered modest. I can’t afford to absorb the losses incurred by book piracy and free downloads.

Please, if you feel you have to steal my book to read it, I’d rather not have you for a fan. I can’t afford you.