Speculative Fiction Romance author Frances Pauli decided to stop by today to celebrate Valentine’s Day with us with an irreverent and fun interview as well as a giveaway! Frances is currently on her Blog Tour, Fairies in February , which wraps up today! She’s here promoting the third book of her trilogy SPIDERS FROM MEMORY but we decided to talk about the silly things that writers don’t often get asked.

Over, but only out of pure rebellion. I had a horrid, controlling ex who insisted on under. Once I’d ditched him, it’s been over ever since. How’s that for too much information?

I write fairies. Can you imagine the chaos? Lamps would be broken, papers scattered. Don’t even get me started on the dishes. Still, the little buggers can lift a lot for their size, and there are a lot of them. I suppose if I didn’t mind my books sorted by color and my clothes hung up inside out, it might not be a bad idea.

Pepsi all the way. Coke tastes like syrup. Pepsi, good. Do you remember the Pepsi challenge? Ah, the olden days. I took it many times at fairs and such. I’m a Pepsi girl nine times out of ten.

Now that is a fun scene. I’ve always loved it, not to mention the childhood crush I nurse for Dick Van Dyke’s character in Marry Poppins. But, I assume you mean the random writing prompt and the ensuing, chaotic brilliance. I’m pro penguin—fish slapping ninja or not. Random is good. It makes you stretch, twist, contort (sometimes giggle). I’m also pro writing group. Anything that keeps the brain churning and the fingers tapping is worth its weight in gold…or fish.

Android. First off, I couldn’t take the guilt—those sulky looks and mumbled curses. Ugh. House elves are a great idea, but an android can be programmed to do its duty with a smile. They also have more attachments and would be a better line of defense in the case of apocalypse—zombie or otherwise.

Sex or death. Not for the reason you might think, though. I always swear if I get stuck that I must either write a sex scene or kill off a character. Since I naturally resist doing either, I rarely get stuck. The pure fear of the ultimatum hanging overhead keeps my fingers moving. I have only once had to bring said threat into play, and I’m not about to admit which I chose.

Chocolate. Okay, that’s not writing related. Escapism, possibly. I tend to live in my head, in my dreams, anywhere but in my own ordinary shoes. But when it comes to rejection letters, bad reviews, good reviews, acceptance letters, deadlines or releases, I find that chocolate always manages to fit the purpose.

I’ve read Speculative Fiction my entire life. I adore it. I’m passionate about it. I live in those worlds in my innermost imaginings. Writing anything else would be very much like writing another culture. I’d have to learn it, and even then, would I understand it fully? Could I lend it the same passion and fervor? It might be fun to try, but I think I’ll always know where home is.

Andre Norton, Tanith Lee, and Patricia McKillip are my all-time top three. They moved me at a very impressionable age, opened doors to worlds that still enchant my thoughts and taught me just how fantastic speculative fiction could be. My more contemporary favorites lean toward humor (which may have something to do with getting old and jaded) I read Christopher Moore, Gregory MaGuire, and Terry Pratchett as well as a great deal of amazing fiction by authors I know personally.

Trekkie forever. I love Star Wars (or the older half of it) and I do enjoy Firefly immensely. But my fan levels spike when anything has to do with Trek–Original, Next Gen or DS9 in particular. I’m dating myself there, but I also have an uber soft spot for the Ferengi and an appreciation for the abundance of romantic subplots in the Star Trek franchise. Also, I own a Klingon headpiece, which a woman my age should probably never admit publicly.

I dreamed of Lockland, actually. He showed up in trouble and in need of serious rescue. He demanded, in fact, and I had no choice to provide a story to explain and solve his predicament. I can’t resist an elf, in particular not one with long white-blond hair.

Elizabeth is perfect for Lockland primarily because she is so intensely human. She is flawed, mundane, and at the same time inherently noble. He’s fascinated with her world, and she’s devoted her life and work to protecting his. They both struggle with not fitting exactly into their people’s expectations, and they both are working for the same ideal—equality and acceptance.

If I do, and I’m not admitting anything, I’m not going to share it. Not for all the chocolate and fairy candy in the known universe.

Thanks so much for having me and for the FUN questions! I am offering a free pdf of any book from my backlist to one commenter today, and for each stop on the tour that you comment on, you will earn one entry into the final drawing for print copies of all three books. Follow along and enter to win!

Frances Pauli writes speculative fiction with romantic touches. Her books are published through Mundania Press LLC, Awe-Struck, and Devine Destinies, and her short stories are featured in various anthologies. More information on her worlds and writing can be found on her website and blog, and she offers free online stories, web serials, podcasts there as well.

A Moth in Darkness 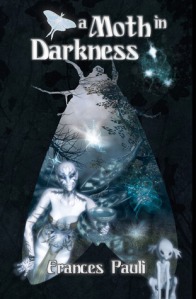 The boundaries between the worlds have fallen. Forced to integrate the creatures of fantasy into real life, humanity struggles against its disillusionment, prejudice and an inevitable feeling of inadequacy.

Once an agent for the embassy that mediates between the worlds, Elizabeth Larson has abandoned her past and slipped into a world of nostalgic addiction to fairy revels, dancing, and the dark lure of her own memories. But when Lockland Sheen, her former partner and lover, goes missing, she is pulled reluctantly back into service. She must venture once more across the borders, into the land that haunts her, facing a string of gruesome murders, the imposing Sidhe rulers and her own addiction in the process.

While the Embassy’s agents attempt to soothe tensions between the races, Liz and her new partner search the fairy realm for Lockland. Fighting the constant temptation of the revels, they piece together the trail of an unknown enemy. But the longer they follow it, the more it appears that the man they came to rescue is more villain than victim. And the more they rely on Elizabeth’s ties to the fairies, the closer she inches toward the madness that lurks behind her fantasies.

The Fly in Paradise

Something’s rotten in the Fey lands. While Marcus Bramble tracks the lunatic who started it all, Elizabeth and the crew at the Embassy sort through the evidence he left behind. With Lockland back, and the revels behind her, Liz’s world is slowly returning to normal. But on both sides of the borders, shadow creatures spring out of nowhere, and the dark legends surrounding the fey take on a whole new meaning.

Now time is against them.  On the mortal side of things, protesters rally to close the borders, politicians descend on the Embassy, and something that shouldn’t exist stalks Elizabeth through the city.

In his world, Marcus faces a madman with answers he doesn’t want to hear. The Fey rulers turn a blind eye on forests teeming with imaginary monsters, and the Sidhe tower stands silent amidst the chaos. Will the race to uncover its secrets solve the mystery of the elves’ past or unleash even more horrors on them all? 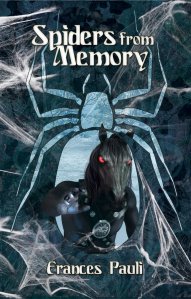 The Seelie court is gone, and the Tower has fallen into darker hands. Now nightmare creatures terrorize the Fey races, and the whole Fey world turns to frost and shadow.

Liz Larson holds the last remnant of the Seelie Sidhe’s power. The elves look to her for guidance, but all she has to offer them is the disturbing story of their origin, the final truth that will turn many of them against her. With her dwindling number of allies, Liz needs to reopen the borders, to find the missing Marcus Bramble, and to avoid the sudden, terrifiying attention of the new Fey ruler, the Unseelie Speaker and new master of the Sidhe Tower.

While her friends in Mundanity race to pry open the gates, and Marcus searches for the answer to a puzzle that could save or damn them all, the Unseelie Speaker marches north, bringing his army and his wrath to focus on Elizabeth. What can one, fairy-touched human do in the face of the Unseelie court’s full fury? How can she fight when the enemy’s anger is only partly blind, when she can see all too clearly the traces of justice behind it?