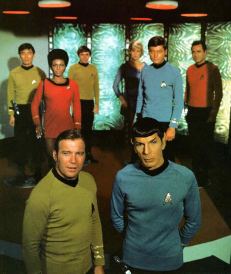 One of my earliest memories is of piling up on the banquette with my brothers and sister  in the galley of the family Chris Craft, watching Star Trek The Original Series (TOS) on a four-inch black-and-white screen. I even remember the episode. It was The Apple from Season 2. I made up my mind at that very moment that I wanted to be Captain Kirk.  As a child, I had the tricorder, both types of phasers, the action figures (I had all of them and they tormented Barbie something fierce.) I even signed a petition calling for the renaming of the first space shuttle as The Enterprise.

I would never make it into the space program, and my television career never quite made it out of live sports. Like most writers, I started out writing fan fiction. Gene Roddenberry’s “Wagon Train in space” had lit a spark in me for the world of science fiction that burns to this day. No one was happier than I when the franchise got a restart with the films and later with TNG. But sadly, something seemed lacking from those early days, and while I maintained my enjoyment of the Star Trek universe offerings, Star Wars took over my spacer’s heart.

I sat through all the Trek offspring, the animated series, TNG, DS9, Voyager, and Enterprise, as well as the films, the good, the bad, and the eye-rolling disasters. With great excitement, I went to the movies to see the JJ Abrams reboot only to suffer crushing disappointment. Yes, I stood up in the theater and yelled at the screen, “That’s not the way it happened!!!” I even did the unthinkable by taking a bathroom break in the middle of the thing to keep from getting kicked out. I have yet to see the second one, or even the first one again. Knowing that Abrams is helming the future of my equally beloved Star Wars, I have nothing but stark terror in my heart, especially after hearing the rumblings that he’s throwing out the Lucas-approved novelizations and canon. Abrams is the antichrist… but that’s a blog post for another day.

I’d heard rumblings about a new Star Trek fan series, but let’s face it, most of what’s out there is parody, and what isn’t parody is…well…, not Roddenberry. It wasn’t until after I saw ringing endorsements by fellow geeks, Patrick Stutzman and Cary Caffrey, (and couldn’t stomach another episode of Sophia The First while home with a sick five year-old,) that I decided there couldn’t be any harm in a little peek. After all, after JJ Abrams, it couldn’t be worse!

Let me say that I couldn’t have been more pleasantly surprised by Star Trek Continues. For those of us who cut our teeth on Star Trek TOS, it’s like finding the Holy Grail. It’s all there. It feels like finding the lost episodes of the last two seasons as envisioned by Gene Roddenberry himself. The sets are flawless, the scripts are brilliant, the acting is straight out of Desilu Studios 1968.

Vic Mignona is in the famous naugahyde E-ZBoy Barcalounger with all the cool buttons and switches on the bridge of NCC-1701. He does a credible Captain Kirk that is far more palatable in this fan made series than Chris Pine’s portrayal in the JJ Abrams debacles. Mignogna appears to be the driving force behind the concept, credited as executive producer, director, and story creator, as well as the cowboy captain himself. Mignogna’s portrayal of the iconic Kirk is neither a Shatner impression, nor a departure from Shatner’s portrayal. Rather Mignogna builds on William Shatner’s interpretation of James T. Kirk and despite the subtle differences in the actors and their styles, I forgot I wasn’t watching an original 1968 production, and when I did remember, I really didn’t care anymore.

While the bouffant hair is sadly missing, the short skirts remain. Easter Eggs and nods to the original canon are so deftly integrated that the whole thing feels like it was channeled from a parallel universe in which NBC did NOT cancel TOS after the third season. If not for the cameos of the likes of Star Trek TNG alum Marina Sirtis as the voice of the computer, Erin Gray (Wilma Derring – Buck Rogers) and Lou Ferrigno (The Incredible Hulk,) and regular Grant Imahara (Myth Busters) as Sulu, it would be easy to lose oneself in the illusion of a parallel universe. Chris Doohan, son of the late James Doohan, reprises his father’s role as Montgomery Scott. If you ask me, he does a fine job, laddie.

The scripts of the first two episodes have been stellar. Both are well-written and well-executed. As a fan who cut her teeth on TOS, I cannot be complimentary enough. Like the original scripts, they are morality plays set on the decks of the Federation Starship Enterprise. However, they are so well-written and produced that the drama unfolds organically in the best literary tradition and the viewer is entertained and coaxed to examine his own view of right, wrong, and humanity.

I have always said that I grew up with Star Trek values. My view of right and wrong was heavily influenced by Gene Roddenberry and the Star Trek TOS universe. Right is right. Wrong is wrong, even if it’s legal, and some things are worth laying it all on the line to fight for. In this tradition, Star Trek Continues does not disappoint.

The most recent episode — Lolani — was released February 8, 2014, and in the vein of TOS, addresses the timely social issue of human(oid) trafficking. With all the senstivity and moral outrage of any Roddenberry era scripts, Lolani  shines the light on an uncomfortable practice that most of us give little thought to, as it feels so very far removed from our daily lives. When it is uncomfortably thrust into Kirk’s lap, he has to deal with his own moral dilemmas, politics of the day, and even orders, weighing the law against morality. As Captain Kirk, Mignogna’s portrayal is spot on, taking the audience through the gamut of emotions, subtly executed as he explores the weight of command and the toll it takes on a man of honor. Likewise, actress Fiona Vroom absolutely played the Orion slave girl Lolani with dignity and pathos and all the slinky seductiveness for which the green-skinned femme fatales are known.

My only complaint is that, like TOS, there are too few episodes and I’ve seen them already. If you are a fan of TOS, or you have no idea what we oldsters expect of revisiting TOS, have a look at Star Trek Continues. I will be eagerly awaiting future installments. I expect great things from Mignogna and his USS Enterprise crew.